The phillips screwdriver is oftentimes one of the most heavily used implements on your multitool. Phillips screws (also called crosshead screws) are much more common today than the previously dominant slotted screw. As such, having a good quality phillips screwdriver on hand is critical. How to go about including this important driver on a multitool has been a challenge, solved a surprisingly large number of different ways.

The following is a sample of phillips screwdriver blades on a variety of different multitools. Occasional notes and commentary have been added. 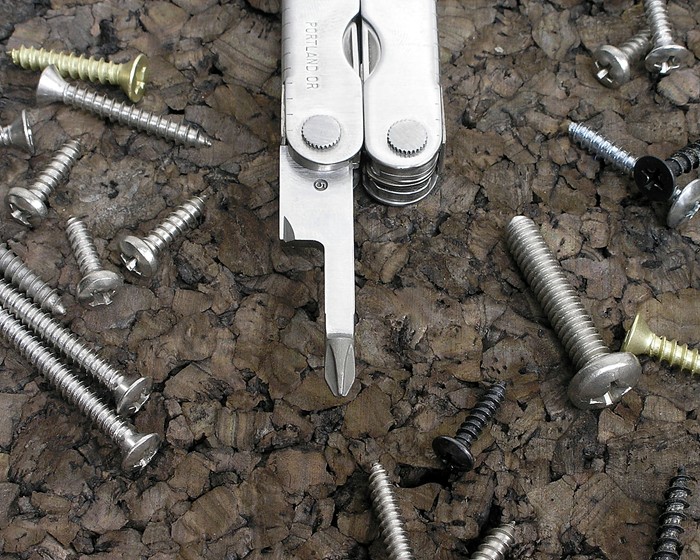 25 years ago the first Leatherman PST's had a pretty decent phillips on them. The body and shank were polished, so it would fold out smoothly, but the head was left rough, allowing it to "grip" a stubborn screw better. The only flaw in the design of those first phillips was their tendency to fold up under pressure. Ouch!

In response, Leatherman started equipping their tools with a "bent" or offset phillips. Under pressure, the forces work to hold the phillips open, rather than allow it to fold up. 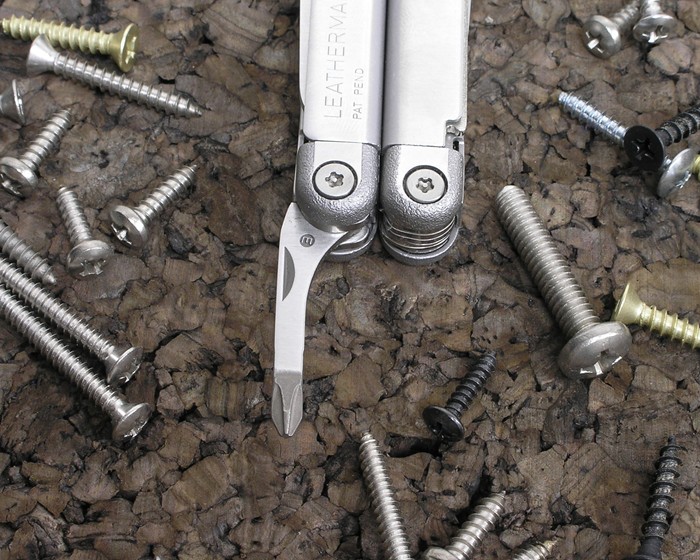 Later, when the Original Wave came out, it used the same "offset" principle. 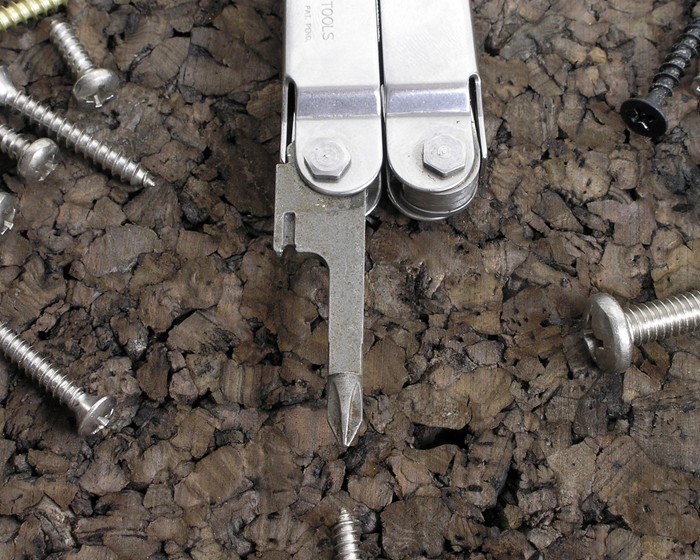 SOG uses a phillips screwdriver that is very similar in design to the original PST. On the old non-locking PowerPlier and Pocket PowerPlier, you can see how this design is susceptable to folding under pressure. 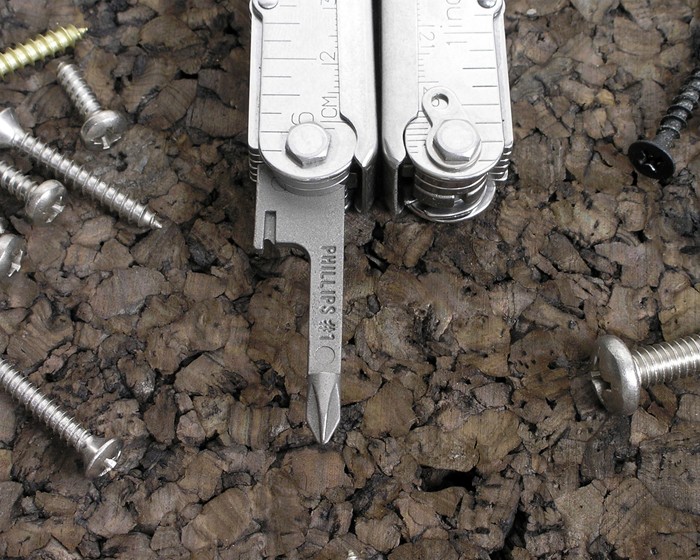 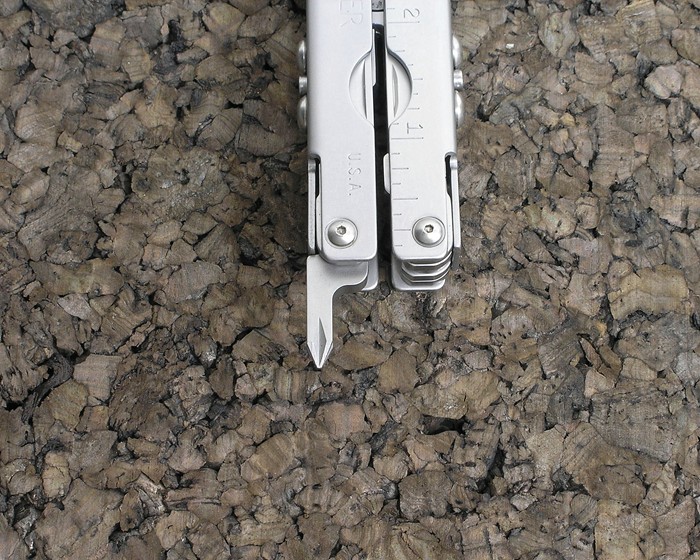 Original Gerber Multi-Plier tools came with a full square phillips. The head size was a #2, and the solid shank meant they were stronger than their competitors. Offset heads meant they didn't fold up. The downside was their short length, and the fact that the full width shank took up space that could have been used for other blades. 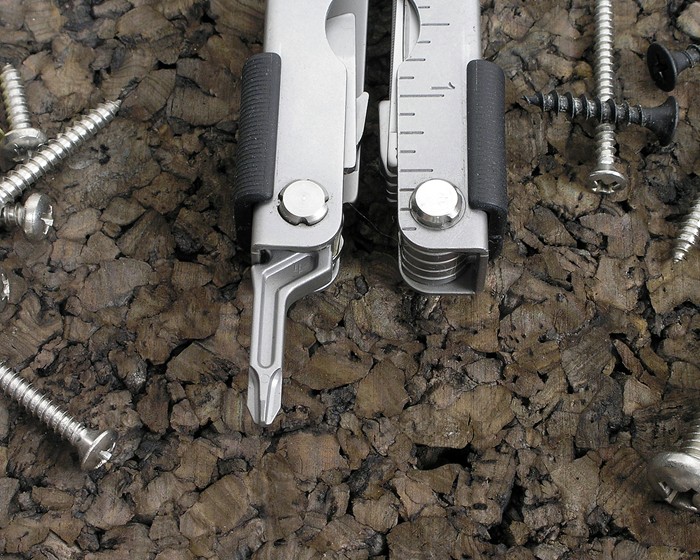 The next generation of Gerber Multi-Plier (the MP400 and MP600 series) addressed these concerns somewhat, giving the phillips a slightly longer reach. 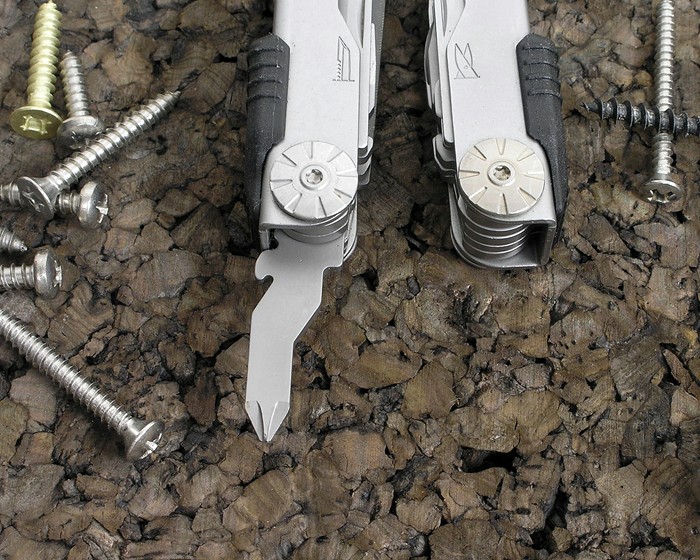 After that from Gerber came the Diesel, and on it we see a flattened phillips driver. This allows more blades to fit in the handle, but the design does not seem to grip screws as well. 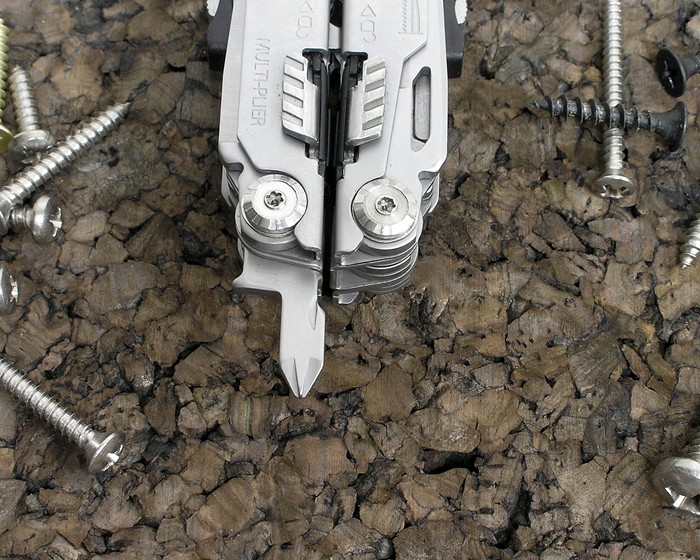 Most recently, it seems as if Gerber engineers have taken a step backward. The new Flik tool has a flattened phillips driver like the Diesel, and the length has been reduced to an almost ridiculous stubbiness. 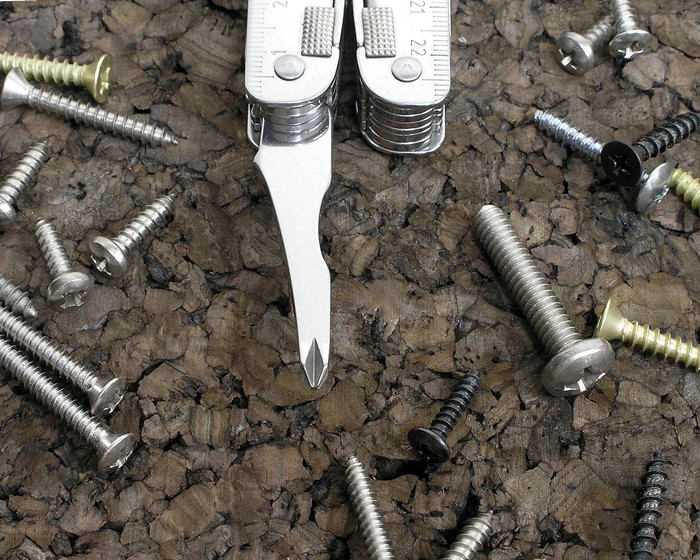 At Victorinox they had of course been making screwdrivers for a long time prior to the SwissTool. The phillips driver has plenty of reach, a full head, and a reduced shank. All good things. Exactly how this driver is manufactured is uncertain. It appears as if the head area has been "squashed", with the metal from the grooves being displaced out into the teeth, flaring the end somewhat. 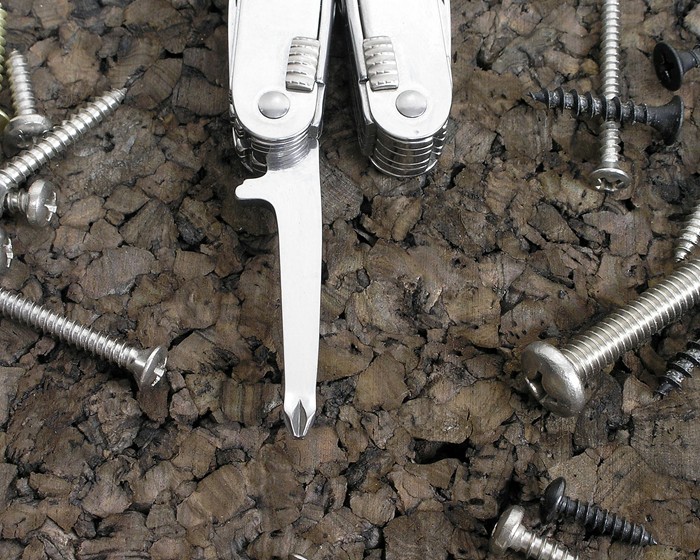 A few years later the Swisstool Spirit arrived using the same proven manufacturing technique on its Phillips screwdriver.
Complaints have been made stating that the high polish on Victorinox screwdrivers causes them to slip easier on tight screws. Another observation is that the Victorinox Phillips don't seem to fit snugly in many Phillips screws. Perhaps there is some difference between European and American Phillips standards. 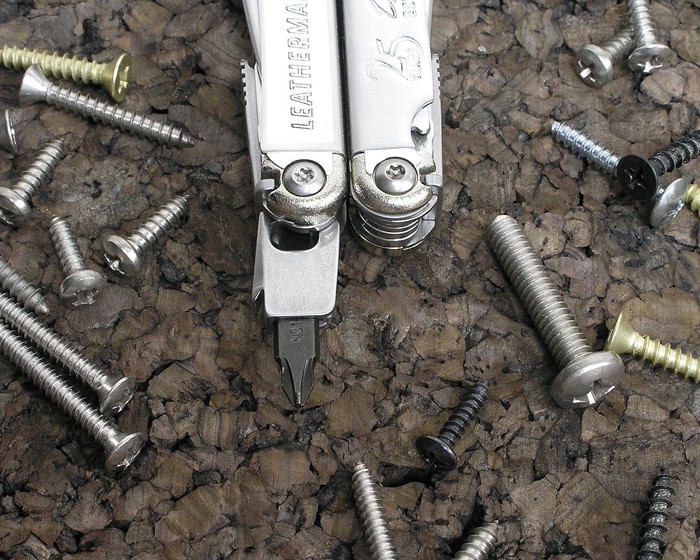 Meanwhile Leatherman continued to innovate. When the 2004 New Wave and Charge models came out they are equipped with an interchangeable bit driver along with proprietary flattened hex bits. A variety of different bits are available. Some like the versatility this provides. Others dislike the limited reach this system restricts them to. The larger Leatherman Surge utilizes the same bit exchanger system as the New Wave and Charge series. 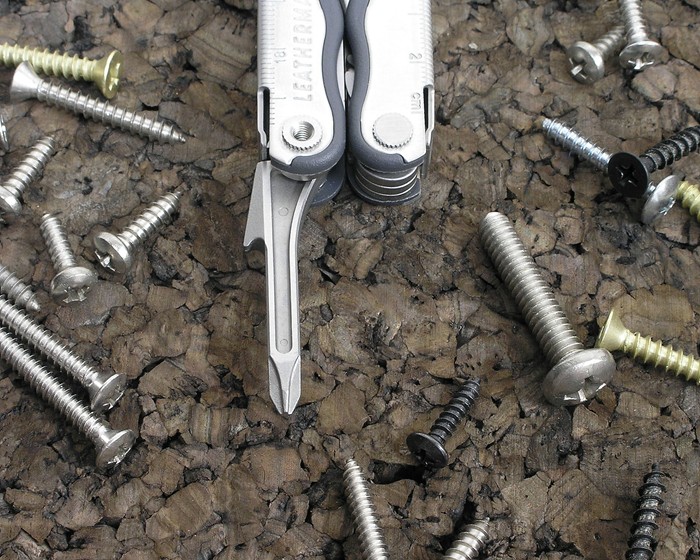 At about the same time Leatherman introduced a new generation of dedicated drivers on some of its multitools, like the one (shown at left) on the Kick. It has a good reach, a #2 head that fits into screws properly, a textured finish, and is properly offset. The same driver appears on the Fuse and Blast, as well as the newer Rebar. 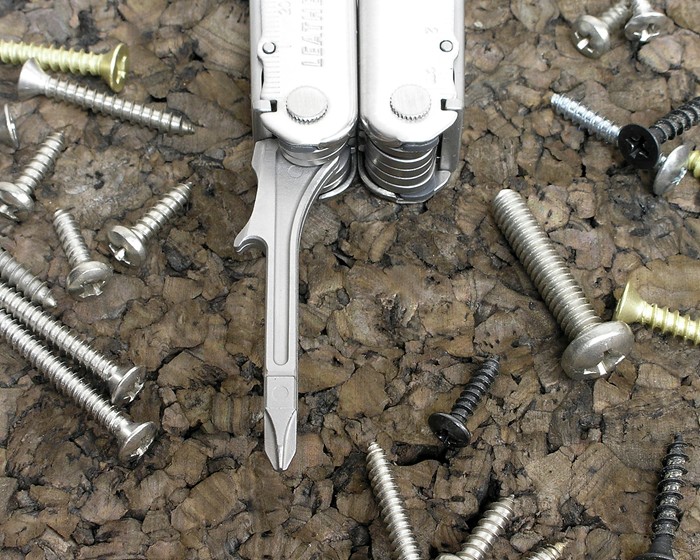 A similar dedicated Phillips is on the Core, except that this one is longer still. The same driver appears on the newer Super Tool 300. 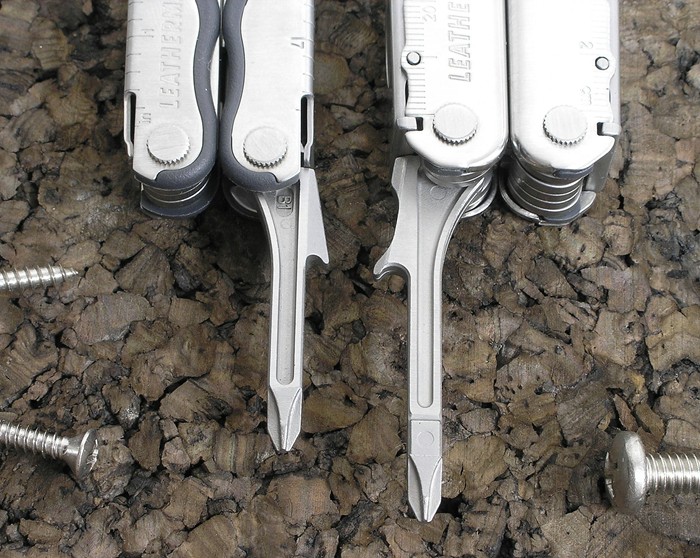 Shown at left is a length comparison shot, with Kick on the left and Core on the right. 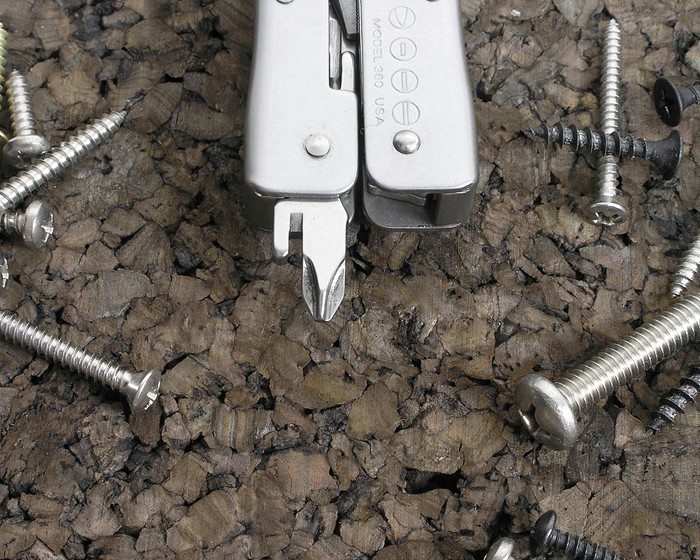 The BuckTool 360 originally came out with a short, three-toothed Phillips that was flat on the back side. 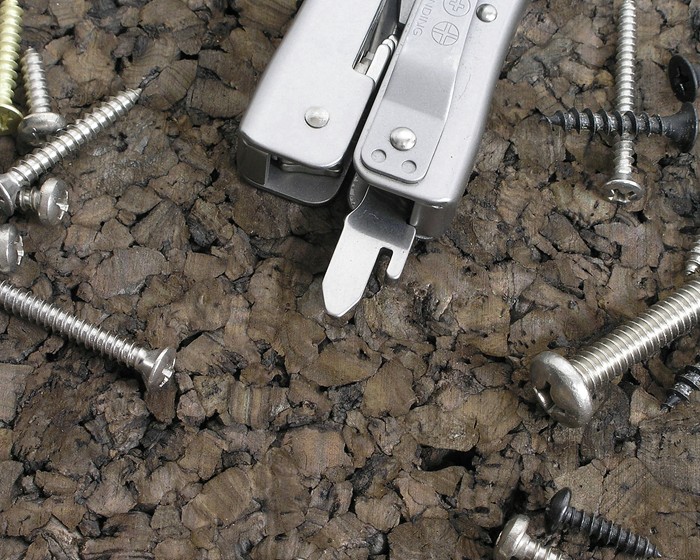 Backside of an early BuckTool 360 Phillips at right. Apparently this design allowed them to squeeze more blades in. 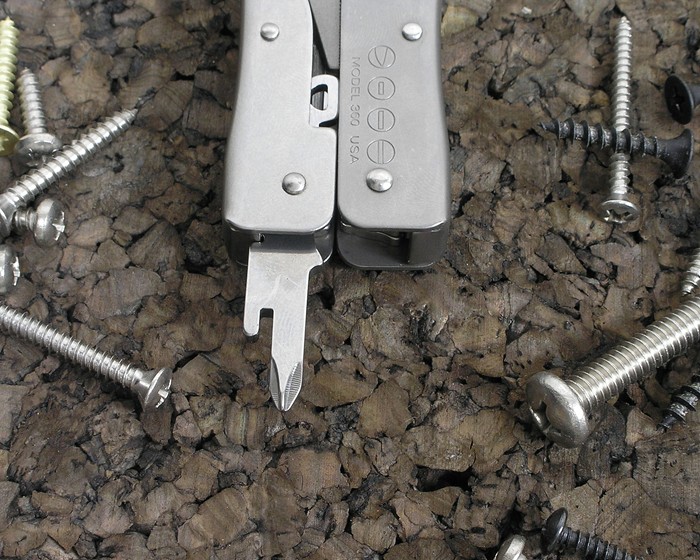 Later models of the BuckTool 360 have a full four-toothed Phillips. This style also has little gripping ridges on the teeth, which were intended to grab the screw better. It was still rather short in length though. 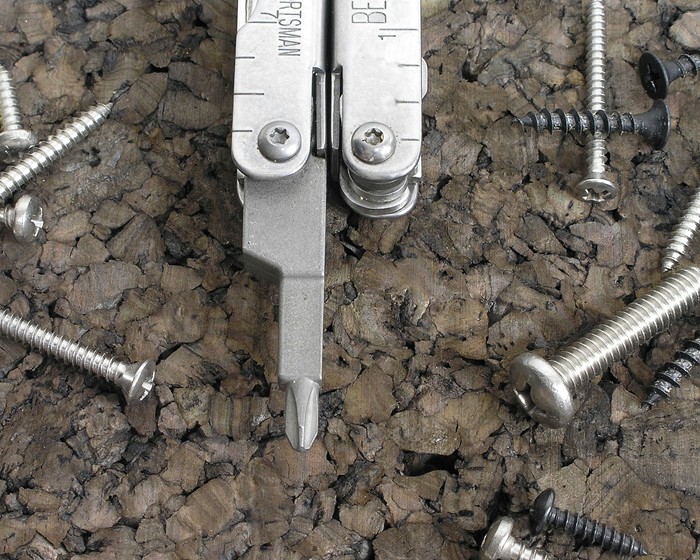 Phillips drivers on Bear Jaws tools are massive, solid cast affairs that take up a considerable amount of thickness in the handle. This leaves less space for additional blades. 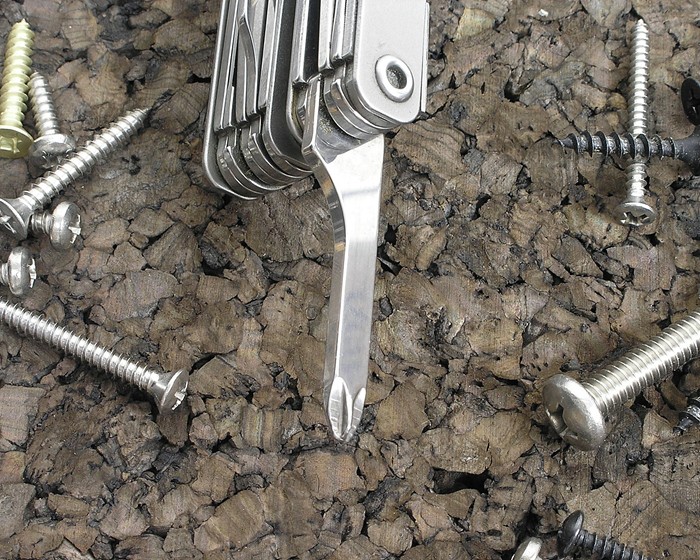 Schrade Cutlery's ST1 Phillips screwdriver is somewhat flattened, with two full teeth and two shallow teeth. It has decent length to it, and gripping ridges like we saw on the BuckTool 360. 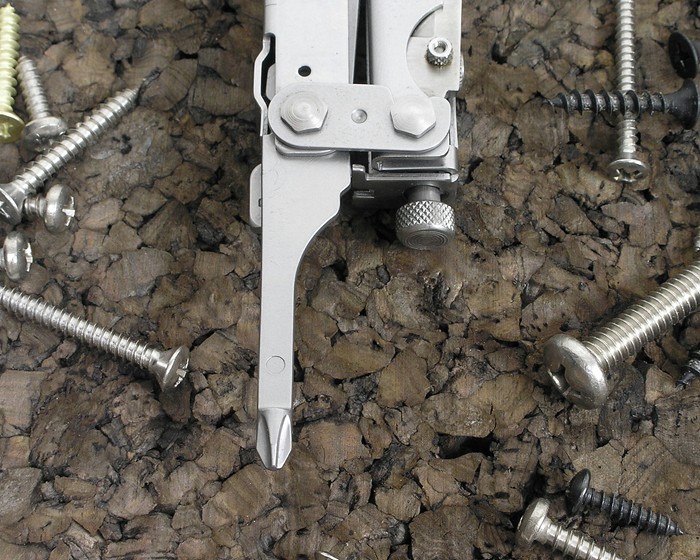 The Phillips driver that Kershaw included on their A100 Multi-Tool is reminiscent of the early Leatherman or current SOG style, with its full #1 head and reduced width shank. The offset direction is correct though, which is important in a non-locking multitool.
History